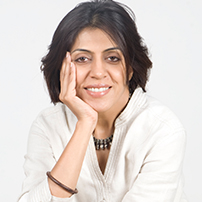 Leena has been brand ambassador for Fuji India and an artist in residence in France in 2006/07. Her work has been published in various publications. Her seminal work “Calcutta: Repossessing the City” was launched as a book, published by Om Books International (2007) has been a best selller. Other photographic books to her credit are “In the shadows” co-authored with Payal Mohanka in 2006 and “Flurys: The Cake That Walked” by Bachi Kakaria.

“Her works were a part of Sotheby’s Spring Asian Art auction (March 2009). She created a 2 part photography installation, titled “East City” for The Birla Academy of Art and Culture (February 2010). The show has traveled and has been displayed in New Delhi as ”Entropic Sites” (Jan 2011) and to Iran as “I saw that which remained unseen” (June 2011). The last version of her installation was shown in a group show in Berlin in (June 2012), titled “ When Violence became decadent” and in Weimer in Germany (March 2013). Her work has always reflected her preoccupation with human trafficking and has found a new language in her public art work MISSING. The works were launched at the India Art Fair in 2014 and since then she has run a successful crowd funding campaign, July 2015, to gather support and spread awareness on the plight of young girls lost into the dark holes of sex trafficking.

The MISSING Public art project has evolved since its conception into a four part project and uses the public as important stakeholders in the project. This through an online and offline campaign. The street stencil art project has gone viral since 2015, anyone who wishes to be a part can create the iconic silhouette on the walls of their city. The stencils can be seen across the country in metro’s like Delhi, Mumbai, Chennai, Bangalore, Kolkata and in the thick of the trafficking belt in Kishangunj, Bihar and Kokrajhar, Assam, Kultoli in West Bengal to name a few. The project soon be joining hands with UNICEF to spread awareness on trafficking in West Bengal. The Women and Child welfare ministry will also using the MISSING art works to spread awareness on the issue. The MISSING game for the cause was launched in October 2016 and was recently chosen as the NASSCOM Indie Game of the year. The project is traversing between the tangible and the intangible public spaces and connecting them through the underlying single purpose to generate curiosity, recognition and finally a sense of deep loss. With the silhouette remaining the constant.