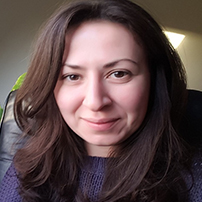 IT Support Specialist at Liberty Global

Lavinia Valean was born and raised in Bucharest, Romania. Her parents were born and grew up during the communism, and she lived under the communist reign for the first 7 years of her life.
Now, it might not sound like much, but the communism stayed for so long that it shaped two generations to become the way her parents were. Women once born were already labeled and there was no other option but to raise the children, clean the house and cook, work hard with no chance of growth, career or equal pay. Women could not carry on the name of the family they were born into and therefore they were not as important as the sons. Fathers had little to no patience with children because it was the mother’s job to take care of them and so on.
She was stubborn enough to do what I wanted, it all came at a cost, but she managed to become exactly what she wanted. It was not an easy road. Hard work was involved and a lot of discrimination, but the experiences were precious and shaped me into the person she is today.
she advocate for equality between women and men. The fact that we are still discussing this subject saddens her, by now, with all the scientific and social progress this conversation should have ended. The fact that it is still ongoing tells her we are not there yet. She feel it for herself in my work.
She has worked in IT Support for a few years and she has always been the only woman in the team. She did not get the same chances her male colleagues got, not because she was not capable, she was able to work just as much with the same or higher results, the praises were there, but the chances never came.
In my work she feel compelled to give back. My work involves direct user support on IT related issues both hardware and software. She learned so far that it is easier for all involved if the person requesting help is actually taught how to do things for themselves, give them the tools to build on rather than just giving the answer every time.
She is passionate about training, She has done teacher work, and her formation is foreign languages. She create training documentation and deliver my trainings to the users herself. “Knowledge is power” and she live by this quote.