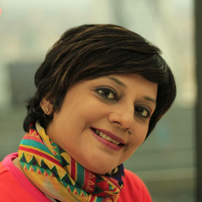 Latha Srinivasan is a senior journalist based in Chennai, India. Currently the Deputy Executive Editor with NewsX, the national English news channel, she comes with over 15 years of experience in the field of journalism. She has been with some of the best media organisations in India and has won numerous awards throughout her career for her work. She was formerly Editor of Yahoo! India, Senior Editor with Deccan Chronicle and Editor of Chennai Times, The Times of India. Latha has specialised in the Indian film industry but her journalism also extends to coverage of important national news. She is considered one of the leading entertainment journalists in India and has even declared the best entertainment journalist in South India by leading media houses.
Latha strongly believes that women’s empowerment is the need of the hour and has spoken on this on numerous occasions at various forums. The need to provide underprivileged women education, skills and employment opportunities is something she is constantly addressing and working on with her friends in the NGO sector. Last but not the least, she is also a breast cancer survivor and does her share in society to increase awareness about breast cancer. She has spoken in numerous women’s colleges and has been conferred awards for the same. On the personal front, she is an avid traveller who loves to experience different cultures and meet new people to share experiences and learn from them. And her motto in life is apt too – change is the only constant.