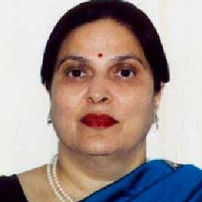 Late Dr. Savita Datta completed her M.Sc. Physics from Hindu College and Ph.D. in Physics from the University of Delhi. She joined the Physics Department of Maitreyi College in 1983 as Founder Member and was appointed Principal, Deshbandhu College in 2003. She joined as Principal, Maitreyi College in 2004. She had successfully carried out the additional charge as Director, Campus of Open Learning, University of Delhi from 2006-2013. She had several papers/publications to her credit in national and international journals. She was the Chairperson of the Syllabus Committee of the Delhi School of Journalism. She was the National Coordinator for Pan African e-network project of the Government of India. She was the member of CII National Committee on Higher Education for the year 2016-17 and also the member of Industry Advisory Council of NIIT. She was felicitated by the University of Delhi for her outstanding contribution to the University on 95th Foundation Day of the University held on May 1, 2017. She was the Project Director for the following projects under the UK-India Education and Research Initiative (UKIERI) of the British Council :
• The ‘Supported Blended Learning’ project with the Open University, Milton Keynes
• eMATS project with Edinburgh’s Telford College
• ‘Employability and Entrepreneurship’ with the University of Birmingham

She has also received the following fellowships and awards :

1. Pratibha Award – 2014’ for excellent and outstanding contribution in the field of education by Indraprasth Sanjeevni.
2. Awarded Travel Grant by the British Council in March, 2009 under Professional and Technical Skill (PTS) Strand of UK-India Education and Research Initiative (UKIERI) for partnering with UK Institutions to jointly deliver vocational/professional courses in the University of Delhi.
3. Awarded a fellowship by Commonwealth Educational Media Centre for Asia (CEMCA) for a study tour of various Open Universities in Singapore and Malaysia from May 24-31, 2008.
4. Distinguished Alumni Award for excellence in Academics in March, 2008 by Old Student’s Association of Hindu College.
5. Higher Education Award in April, 2004
6. World Literacy Award in September, 2003.