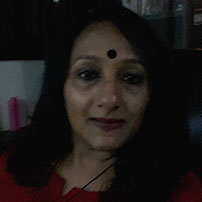 Lata Gwalani is a behavioural trainer and motivation speaker. She has imparted training in the areas of Communication, Transactional Analysis, Business Etiquette, Emotional Intelligence, Neuro Linguistic programming, Motivation, Relationship, Leadership and Team-Building, Personal Effectiveness, and Time Management. She has conducted over 1800 workshops and has trained over 32000 people. Besides corporate workshops, Lata also delivers lectures at various educational institutes and seminars, having covered a cross-section of people right from teenager students to retired professionals.
Lata Gwalan was born in Pondicherry, grew up partly in Delhi and in Zambia. She returned to India to S.I.E.S. College, Mumbai, where she obtained her undergraduate degree and went on to specialise in Mass Communication and Journalism in Pune. She has been in a steady relationship with the French language, beginning with her Birth Certificate through her stay in Africa.
After almost a decade of active journalism with leading publications, she discovered her passion in the depths of the human mind and psyche. Now, a Neuro Linguistic Programming (NLP) practitioner and an EI specialist, she runs Human Impact Training and Consulting Pvt. Ltd, a company that specialises in behavioural training. She is also trained in Rational Emotive Behaviour Therapy (REBT). She is certified in Emotional Intelligence Competency by the Forum for Emotional Intelligence Learning and SBM NMIMS University. She does extensive work with managers, parents, and especially with women in this area.
She lives in Mumbai with her four-member family — husband, son, mother-in-law and her four-legged daughter, Sera, a German Shepherd.
When not conducting training workshops, she writes articles for numerous publications, runs half marathons and has successfully got five marathons under her soles. She speaks at numerous clubs and associations, does bharat natyam, and has an insatiable appetite for books.
Women-related work
Lata has been doing a lot of work in the field of Emotional Intelligence, particularly with women. She has pioneered a workshop exclusively for women, named EVE, where she addresses the major emotional upheavals that women encounter both at home and at the workplace. She has been invited to several forums to speak on this subject.
Published Author
Lata is a voracious reader and a prolific writer having written articles for various publications. Her debut novel, INCOGNITO, a psychological thriller was published early last year and is doing phenomenally well both in the domestic and international markets. It was also ranked 7th on Flipkart’s list of debut authors. INCOGNITO has made it to the Crossword Books Awards Long List this year.