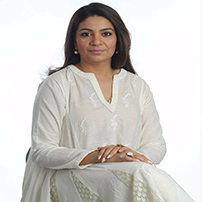 Larra A Shah is a Celebrity Astrologer and Herbalist. Born with a gift and flair of Intuitive Instincts an extraordinary level of heightened awareness, allowing her to see auras, spaces, futuristic events and past history of her clients. She uses her ‘all-embracing knowledge by a range of Holistic Services for wellbeing, to life path reading and to empower and help her clients achieve full potential in their journey towards Personal & Spiritual growth. In the past 2 decades she has achieved several awards for her contribution, social work and research.
It has been proven time and again that good health, prosperity, and peace of mind – the three aspects of well-being – are inextricably linked to the energies in an individual’s immediate space. An imbalance in these energies could trigger constant struggles in the person’s life, draining him/her of vitality and resources. The art and science of Jyotish or Astro Science has, from time immemorial, brought good health and prosperity into people’s lives through optimally balancing these energies.
Originally a Vedic system of knowledge, Astrology has over time crossed the borders of India to become a symbol of good living across the world. People from every walk of life, from businessmen to the common man, from politicians and sportspersons to film stars have acknowledged the power of this ancient body of knowledge and utilized its wisdom to imbibe positivity.
Larra has hosted a successful television show, and appeared as a special guest on national and international television and radio. In an effort to reach out to people across the world, Larra offers consultation over phone and Skype. A keen philanthropist actively involved in women empowerment, Larra’s hope is to continually cascade the state of complete wellness through her consultations.
“I live by knowing, feeling and believing. This extends to all aspects of my life whether it’s working with a client, writing a book or planning my day. I have been blessed with these gifts and can’t wait to share them with you.” Larra Shah
Larra has the ability to sense energies and help people change their own lives. The things that happen to you can be considered your destiny but what if you had the chance to map your own course?

Accreditions:
Larra’s uses her ‘all-embracing knowledge’ to empower people to achieve their full potential in their journey towards Personal & Spiritual growth. She has interacted with the crème de la crème of the society in India, U.S.A., U.K. and U.A.E. along with several eminent personalities from Bollywood and various walks of life.
Her contribution to society did not go un-noticed as her achievements have been felicitated nationally. She was felicitated in Feb 2016 at FICCI New Delhi by Women Empowerment Summit, She received a Gold Medal for her research on EMR and its effects in 2015 by Indian Board, before which she received the Pune Award in 2014 as Puraskar for support of social cause and adopting 9 villages for rural development for the villagers. Earlier, In 2013 she received the Ishama Award for exemplary work in Holistic Wellbeing, and the same year she was bestowed with Women’s Achievers Award by Cancer Aid Society. Larra has not only impacted society but has also been a role model to many.
Larra Shah’s popularity led her to bigger things as she presented her own Television show, that ran for over 64 weeks on India’s leading news channel “Star News”. She is also remembered for hosting a popular morning radio show in Dubai.
Larra has also authored her first book titled ‘Miracle Cards’ which was released in 2009. The book is a ‘Do It Yourself’ insight into day- to- day living for life’s Questions. After receiving an overwhelming response for the first book, she is currently working on her second instalment titled, ‘The Miracle Book’, which provides solutions to a better life.