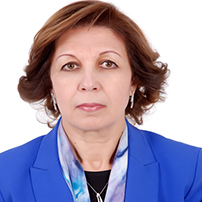 Lamia Boujnah Zribi is President of the National Council of Statistics since August 2017. She has held since August 2016 the post of Minister of Finance. She has also held the position of CEO of the Small and Medium-Sized Business Financing Bank (BFPME) since May 2016.
In February 2015, she was appointed Secretary of State to the Minister of Investment Development and International Cooperation in the first cabinet of Mr. Habib Essid. She also served as CEO of Tunis TradeNet (TTN) in July 2014.
Zribi has been until 2014 Director General of Forecasting at the Ministry of Development, Investment and International Cooperation. Presidency of meetings and negotiations of programs related to external financing.
2012 -2014 Representative of the Ministry of Development in the negotiations and the meetings in the context of stand-by agreements with the IMF From 2009 to 2014, Zribi was also a member of the Board of Directors of the Central Bank of Tunisia and a number of public bodies and companies, chairing meetings and negotiations of budget support programs with international financial institutions and the donors and first responsible for the preparation of annual economic budgets, development plans and annual development reports.
Zribi is a member of the association of Tunisian economists and member of the Mediterranean network “Mixité et gouvernance around the mediterranean. Zribi graduated from the National School of Administration (ENA) in 1993 with a Master’s degree in Economics from the Faculty of Law and Political Science and Economics of Tunis in 1983. and a diploma from the National Defense Institute in 2010