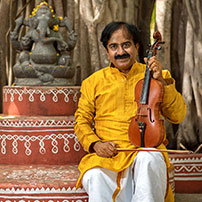 In the classical firmament of India, Lalgudi G J R Krishnan, is a name worth reckoning for his mastery in both form and technique. Son of legendary violin maestro, Sri Lalgudi G Jayaraman, and scion of the musical style/bani that he constructed and nurtured, Krishnan continues – and sensitively – to nourish and carry forward a legacy handed over to him. In his more than four-decade-long performance career, Krishnan has remained true to that lineage and yet carved for himself an individual spot as an artiste recognised for its maturity in melody and command over rhythm.
Krishnan was born with music in his veins. He forayed into a formal study of music at the tender age of five with his grandfather, Sri Lalgudi Gopala Iyer and thereafter found a guru, for life, in his father, Sri Lalgudi Jayaraman. In 1973, Krishnan made his stage debut with a performance that had people sit up and take notice. That concert kickstarted for Krishnan a career that has exponentially grown over the years, earning for him, a following that is far, wide and varied.
A top grade artiste with the All India Radio, credit for Krishnan’s fame must also go to his own artistic journey. As an artiste and a performer, he wears many hats, with elan and ease; in addition to his solo, duet (with his sister, Lalgudi Vijayalakshmi) and trio (sister and father, Lalgudi Jayaraman) performances, Krishnan has also had the opportunity of accompanying many a leading vocalists and instrumentalists on the violin; a few among them are Sri Semmangudi Srinivasa Iyer, Sri T N Seshagopalan, Sri Maharajapuram Santhanam, Sri D K Jayaraman, Sri Nedunuri Krishnamurthy, Sri N Ramani and Sri Voleti Venkateswarulu. He has also had a successful innings as a collaborator, sharing stage space with talented artistes from across Hindustani and Carnatic music, both in India and abroad. His performance career has been shaped also by the prestigious festivals he has performed at – the Lincoln Center in New York, Concertgebouw Recital Hall, Royal Tropical Institute Amsterdam, the Festivals of India in the USA, UK and the USSR. His collaborative projects with artistes like Ustad Shahid Parvez, Gaurav Majumdar, Pandit Viswa Mohan Bhat, Pandit Tejendra Majumdar, Ustad Shujaath Khan, Debashish Bhattacharya and Anil Srinivasan, have won him appreciation as an artiste with openness, a symbol of the classic but one with a contemporary bent of mind. A few years ago, one such experiment lead to the creation of Strings Tradition, a collaborative project with Krishnan, Shujaath Khan and a Kora artiste, Mamadou Diabete.
His most favourite collaborator though is his sister, with whom he has cut several albums, one of which is titled Raga Rasa, a coming together and celebration of different streams of music. In this eight-piece album, aptly named after expressions, the duo has composed four pieces each, allowing listeners an insight into their individual relationship with music as well as their collective common approach to it. A few years ago, Krishnan had the opportunity to compose music for a thematic dance production called Veda Bharathi that delved into the life, learnings and philosophy of the great poet, Sri Subramanya Bharathi. ‘Jagath Paavani Ganga””Sai Nathan Varuga Varuga “and Sambhavami Yuge Yuge”are some of the productions for which Krishnan has composed Music.

Like father, like son, Krishnan is also a very earnest and sensitive teacher; his students have gone on to become performing artistes and continue to carry forward the legacy across the world.
A scholar with deep insights on the music and musicality of the Lalgudi bani, Krishnan has been invited to speak across leading cultural forums on aspects of music and the lineage. A few years ago, he received a Senior Fellowship from the Ministry of Culture for a period of two years. More recently, he received the Sangeet Natak Akademi award from the President of India. In September 2017, Lalgudi GJR Krishnan along with his sister Lalgudi Vijayalakshmi received the prestigious Indira Sivasailam Endowment Award – the first ever instrumentalists to receivethis.
Krishnan also wears a hat as the torchbearer of the Lalgudi Trust that his father founded with an objective to keep the art and tradition of the violin alive, for posterity. With an accent on youth-oriented initiatives, Krishnan has been for three years now, been organizing Violin Wise, a violin repair and restoration workshop that will teach musicians, craftsmen and arts enthusiasts, the science and art of restoring a violin.
On stage, Krishnan’s music is subtle, sensitive but also breathtaking. Immersive in its feel and experience, and evocative of sheer mastery over the bani that is representative of the classical but very receptive to the idea of imagination and innovation, Krishnan’s relationship with the violin is nuanced and layered. In his music, one can celebrate the simplicity of the complex in the way he handles a phrase or two as well as the complexity of the simple.