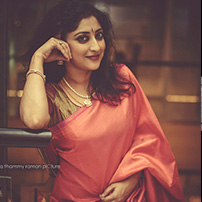 A proud kannadiga,Lakshmi Gopalaswamy’s has been a performer since the young age of 12, and has been recognized as a dancer of repute. Her mother,Dr. Uma Gopalaswamy, reputed classical singer provided her the required artistic nourishment that encouraged her to take her first conscious steps into the world of art. She began her initial lessons under the tutelage of Late Smt. Padmini Rao. She completed her Rangapravesha under the watchful eye of Smt. PAdmini Ramachandran and further honed her skills under the able guidance of Guru Smt. Narmada and Prof. MR. Krishnamurthy. Endowed with classical features, she has grace and a natural demeanour befitting to this art form. Lakshmi believes in the traditional repertoire of Bharathanatyam being inspired by its rich musical content. She aspires and aims to bring out every subtle nuance of music with the language of Bharathanatyam beautifully.Recognising her immense talent, Lakshmi has been presented with several awards, a few among them being the Dr. MGR Award from the Madras Music Academy, the Yagnaraman award for excellence in Bharatanatyam by Sri Krishna Gana Sabha and the Sangithya award for contributing towards Bharatganatyam in Karnataka. . She is an A TOP grade artist of the Dooradarshan. With dance being Lakshmi’s passion she has also explored cinema as a medium for self-expression. Having established herself as a sensitive and versatile actress in Malayalam, Tamil and Kannada cinema, she has been decorated with various honours, among them being the kerala chalachitra award for her debut film in 2000 and for films Taniye and Paradesi in 2007. She was a presiding member of the Jury of the Kerala state Chalachitra Academy in 2003. She has also received the Karnataka State best actress award for her film Vidhaya.Currently pursuing a PhD in cultural studies, Lakshmi has been a true ambassador of art- in dance and film, having presented it at various for a across the world. She aims to continue to delve deeper into the subtleties of the art while making it accessible to all.