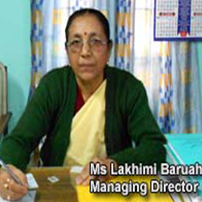 Before starting KMUCB, Lakhimi worked in a bank, which made her aware of how deprived and illiterate women barely manage to benefit from banking services.She had also started a Mahila Samiti in 1983 at Dakshin Sarbaibandha area of Jorhat district, where she worked with a large number of economically and educationally backward women. These women remained financially insecure, even when they were engaged in some income generation activities, because they did not have any saving habits or financial literacy.
After working for several years in the region, Lakhimi was sure that immediate intervention was required. Finally, in 1998, she was able to start KMUCB in Jorhat, with an initial capital of 8.46 lakh. The bank received its licence from the Reserve Bank of India in 2000. Lakhimi quit her job and dedicated her life to KMUCB.