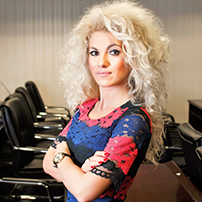 Kristina Tsvetanova (CEO and co-founder, BLITAB Technology) is an acclaimed social entrepreneur who has reached a high level of achievement in the field and has established herself as one of the most remarkable talents who is changing the world through her innovation. She co-invented BLITAB – the World’s first tactile tablet for blind and visually impaired people. In 2015 she was recognized as European Winner of Social Entrepreneurship and Disability, awarded by the European Commissioner for Employment, Social Affairs, Skills and Labour Mobility, Marianne Thyssen. In 2017 she received the EU Prize for Women Innovators under 30 and MIT Innovator 35under35 Europe. Recently Kristina was selected among 2,800 applications from over 130 countries as the European Laureate of the Cartier Women’s Initiative Awards which major aim is to drive change by empowering women entrepreneurs across all continents.
The tech-entrepreneur graduated with honors her Bachelor and Master degree at the Technical University of Sofia and has more than 7 years hands-on experience in Supply chain Management and Industrial Engineering sector at international companies. Thanks to her accomplishments in Europe, USA, Mexico, Singapore, China and Japan in the last 2 years, and her extraordinary persistence to empower unprivileged children via tech, she was called as one of The Social Movers nowadays (Agora+D). Kristina also serves as an innovation consultant to the G7 in the area of Technology, Research & Innovation. She is often invited to speak publicly about innovation, social impact and gender equality in Europe, Asia and USA.