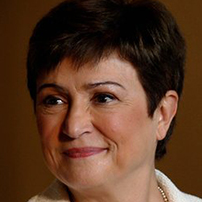 Kristalina Georgieva is a Bulgarian politician and the current chief executive officer of the World Bank.Until 2017, she was European Commissioner for Budget and Human Resources in the college of the Juncker Commission.
From 1993-2010, she served in a number of positions in the World Bank Group, eventually rising to become its vice president and corporate secretary in March 2008. She has also served as a member of the board of trustees and associated professor in the Economics Department of the University of National and World Economy in Bulgaria. On 27 September 2016, the Bulgarian government nominated Kristalina Georgieva for the post of United Nations Secretary-General.Her short run Secretary-General at the UN ended following a vote at the UN Security Council on 5 October, where Georgieva ranked number eight out of ten candidates. In the same vote, António Guterres got the support of the Security Council for the post of UN Secretary-General.On 28 October, the World Bank announced that Georgieva would become the first CEO of the bank starting on 2 January 2017.
Georgieva was named “European of the Year” in 2010 and “EU Commissioner of the Year” as an acknowledgment of her work, in particular, her handling of the humanitarian disasters in Haiti and Pakistan. Previously, she had been nominated among the candidates for the category “Commissioner of the Year”, the prestigious award organized by the European Voice newspaper.