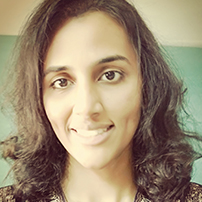 Kirthi Jayakumar is an activist, artist, entrepreneur and writer from Chennai, India. She founded and runs the Red Elephant Foundation, a civilian peacebuilding initiative that works for gender equality through storytelling, advocacy and digital interventions. Kirthi is a Vital Voices Engage Fellow, and a former Vital Voices Lead Fellow. She is currently pursuing her second MA in Peace and Conflict Studies as a Commonwealth Scholarship Awardee, in a blended learning course at Coventry University, UK.
Kirthi is an author, and released her debut novel in 2017, titled The Doodler of Dimashq. Her second book, The Dove’s Lament, made it to the final shortlist for the Muse India Young Writers’ Literary Award.
Kirthi coded an app for survivors of gender-based violence called Saahas, which works as a web and mobile app. She taught herself to code and created a web app, a mobile app and a Facebook ChatBot to support survivors of gender-based violence across 196 countries, and to assist bystander intervention.
In 2016, Kirthi was invited to Michelle Obama’s United State of Women Summit at the White House in Washington DC, as a nominated changemaker. In 2017, she was one of the youth activists invited to attend President Obama’s Town Hall at New Delhi.
Kirthi has spoken at TEDx Chennai, addressing Peace Education as a means to end Bullying. She has also spoken at FICCI FLO, as one of the youngest speakers to address the members. She was also a speaker at the Economic Times Women’s Summit 2018. Kirthi has also had the distinction of addressing the UNV Partnerships Forum on her work as an epoch-making online volunteer with the United Nations.
Kirthi is the recipient of the US Presidential Services Medal (2012) for her services as a volunteer to Delta Women NGO, from President Barack Obama. She is the two-time recipient of the UN Online Volunteer of the Year Award (2012, 2013). She received the 2016 Orange Flower Award from Women’s Web, the 2016 World Pulse Impact Leader Award and the 2017 Empowerment Leader Award from the Dais Foundation. Her work has been published in The Guardian and the TIME Magazine. She was recognized by EuropeAid on the “200 Women in the World of Development Wall of Fame in 2016.” She received the Digital Women Award for Social Impact in 2017, from SheThePeople, the Person of the Year (Social Entrepreneur) 2017 from The Brew Magazine. Kirthi is a recipient of the Yuva Samman from MOP Vaishnav College, in January 2018. The Red Elephant Foundation received the FICCI FLO Outstanding NGO of the Year Award 2018, and the UN Online Volunteering Award 2017. Kirthi was also among the six women featured on Facebook India on International Women’s Day in 2018. She was awarded the Web Wonder Woman award by Mrs. Maneka Gandhi and the Ministry of Women and Child Development in 2019, and the Woman on a Mission Award by Mrs. Sudha Murty at the HerStory Woman on a Mission Awards 2019.