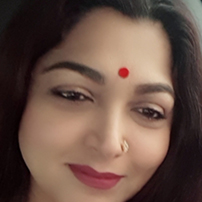 Khushbu Sundar is an Indian politician as a part of the Indian National Congress as well as being an actor and producer. She has constantly defied the traditional norms and conventions and has emerged as one of the leading personalities of India and has successfully carved a niche for herself in South Indian Cinema. With a career of over two decades as a leading lady, she has worked with many notable actors such as Rajnikanth, Kamal Haasan, the Late Vishnuvardhan, V. Ravichandran, Akkineni Nagarjuna, Venkatesh, Mohanlal and Mammooty,
and directors that include S.P. Muthuraman, K. Balachandran, P. Bharathiraja, Mani Ratnam, Fazil, P. Vasu and K.S. Ravikumar. She is also the first actress in the world who has had a
temple built by her fans, in her name. She is also the managing director of Avni Cinemax Pvt. LTD., and the proprietrix of Avni Tele Media Pvt. LTD. Under these production houses, she has produced many successful movies and television shows. She is the recipient of four Tamil Nadu State Government Awards under the Best Actress Category, was the first actress to receive the Best Television Actress Award by the Tamil Nadu State Government, was honored as the Kalaimamani by the Tamil Nadu State Government, is a winner of the Special Jury Award by the Kerala State Government and is a winner of four Film Fan Critics’ Awards. As a woman and as an individual, she has spoken up for the under privileged and the suppressed, she has been an active supporter for the LGBTQ community and is an avid feminist. Mrs. Sundar entered politics in 2010. She is the national spokesperson of the AICC (All India Congress Committee). Apart from these accomplishments, she is also the General Secretary of the Tamil Nadu Television Producers’ Co