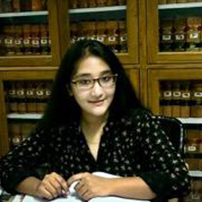 Khushbu jain’s area of expertise is litigation practice pertaining to business/ corporates, criminal law & cyber law. She has represented clients which include government CPSEs, private companies, local businesses, individuals and has been conducting cases which includes appearing personally and assisting Senior Counsels in the Supreme Court of India, High Court of Delhi, High Court of Bombay, PMLA Court, Competition Commission of India, National Consumer Dispute Redressal Commission, etc. Ms. Jain has functioned as an advisor to many start-ups in structuring, compliances and drafting of agreements during incorporation and also during the phase of investments and otherwise. Ms. Jain has been part of many landmark cases and rulings such as – Appearing against Microsoft for infringement of privacy. Counsel for oil PSU’s for validity of AADHAR. Represented IOCL and held consultations with Ministry of Petroleum and Natural Gas (IOCL, BPCL, HPCL) for Dual Diesel Policy of India. Appeared pro bono for a case of Genocide in Sri Lanka. Represented Lake Palace Hotels arguing against Construction ban in Udaipur lake. Appeared in Competition Commission of India in the case of Circular Trading of Guar. Was part of the landmark judgement which held that compromise entered in case of rape is admissible. Represented FTIL in NSEL exchange scam. Part of UP Police’s initiative for creating awareness on Cyber Crime against children among others