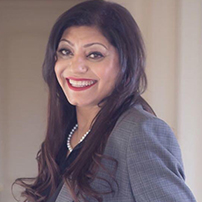 A prominent name among the Indian diaspora of California, Kay Walia is well known for juggling many roles in her professional life. As the owner of the Indo American motion pictures and the founder of the International beauty Pageant stage, she is a common presence among the glitterati. But on the other side of the spectrum, she actively engages in philanthropy and has left her mark with her contributions to charitable organizations, schools and orphanages.
People close to her know her as a woman of strength who has time and again raised her voice against social evils like female foeticide, gender inequality and dowry system. To propagate her message on woman empowerment, she has even produced and acted in two critically acclaimed films. One of her films, Dheeyan Marjania (The forgotten daughters) went ahead and won 5 movie awards and 7 nominations of best movie in various national and international film festivals for its strong message on gender inequality and female foeticide. Outside of the reel world, she works through her NGO called Kripa and seva foundation which offers financial help and rehabilitation to rape and domestic abuse victims.
For a woman who challenges the norm on every step of her professional front, it shouldn’t come as a surprise that she lives and has lived in a similar way, even in her personal life. The journey to where Mrs.Walia stands today hasn’t been a walk in the park, but filled with hurdles and challenges on every step.
She was born in a Punjab farming family and migrated to Vancouver, Canada at a very young age. For someone with pure Indian mannerisms and culture, it was very difficult for her to fit herself in the Canadian culture and learn their language. Being a strong-headed child who was adamant to follow her dreams of becoming a nurse didn’t help matters too. But she stuck to her goal and even when her parents were not financially capable of sustaining her education, continued going to school. There were times when she used to absolutely have no money and had to make do with tea bags and warm water.
One of her habits which played a big role in her life ahead was her regular visits to Gurudwara every Wednesday. There she used to clean the floor so that she wouldn’t feel guilty of having there free food. It was during one of her trips to Nanaksar Gurdwara, that she came in touch with Baba Jee meeha Singh Jee. Having him in her life as someone who inquired about her goals and showed interest in her work gave her the confidence to pursue her dreams. At last with his blessings and her own hard work, she succeed in getting a Bachelor of a science in nursing. Even though Baba Jee passed away just a few weeks before her graduation, she didn’t let to of her goals and continued helping people, as she had dreamt .In the following years she worked in the trauma center, crisis team and the criminal justice system.
Achieving such dreams was not easy, but she never gave up, mainly owing to her indomitable spirit, and later due to the love and support of her partner. Thanks to his help and faith in her, she got to work in the field of woman empowerment and female equality, another cause that had been close to her heart since childhood.
However, in the month of Jan, 2018, Mr. Walia passed away, leaving the humongous weight of his business empire on her shoulders. Today, along with the charitable organizations, Mrs Walia singlehandedly spearheads the food chains owned by her husband.
Such challenges have been anything but easy, but being a woman of grit and determination, Mrs. Walia hasn’t given up. All the more, she is in the process of producing and acting in the YouTube Channel, Flavors of life, where victims of abuse would be heard and helped.
Mrs Kay Walia’s unwavering dedication to her cause, in spite of the trauma of her husband’s death, gives women hope that one can achieve anything when they set their mind to it. In Spite of her sufferings, she is committed to help women and contribute to the community, setting an example for other women like her.