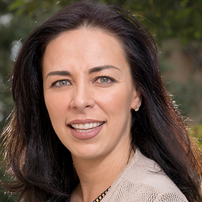 Katia Villafuerte Cardona has a Bachelor of Arts in Psychology, with clinical specialization by Universidad de las Americas in Mexico City, this title was conferred with Honorific Mention. In the same institution she coursed her Master´s degree of Arts in Psychology, with Family Therapy Specialization. Aside of this studies she has another Master´s Degree in Positive Leadership by Tecmilenio University, and a certification in Strategic Coaching and Teamwork by Instituto Tecnológico y de Estudios Superiores de Monterrey (ITESM).
For more than 12 years she worked in different companies, national and international like Actinver, Scotiabank, and Kansas City Southern in Mexico, as the personal assistant of the CEO, General director or President of each of those Companies and in Public Relations. In the last 8 years she has worked as a coach, teacher and as a speaker in workshops, training courses, and simposiums specialized in organizational psychology, and from 2016 she has participated in Executive Education at ITESM as a teacher and as an academic coordinator of different programs, some of the organizations where she has participated are: Diageo, Secretaria de Seguridad Publica, Inmujeres, IBM, Petolf, Unilever, Mondeléz, GE, Adidas, Hugo Boss, Ninja, Roche, Liverpool, Chrysler, Santander, Bosch, Ford, Coca Cola KOF, KIO Networks, among others.
For more than 10 years she worked as the Academic Director of the Bachelor in Organizational Psychology and the Bachelor of Social and Cultural Entrepreneurship at ITESM which ranked among the top 200 universities in the world in 2018. As a professor she has had experience working in middle schools, high schools, and presently with undergraduate and executive education in different public and private organizations.
Currently she belongs to the Leadership and Management Academic Department at ITESM Santa Fe, where she teaches courses focused in Human Capital Development like: Development of Emotional Intelligence Skills, Organizational Behavior and Human Talent Development, Psychology and Leadership in Multicultural Ambiences, Management System by Competencies, among others.
In the last 8 years she has participated constantly in TV programs, radio, written and social media as an expert in the field of psychology, i.e. CNN, Expansion, Reforma, ForoTV, AztecaTV, El Financiero, El Economista, Alto Nivel, Radio Formula, Grupo Imagen, among others.
In the past she worked as a psychotherapist for 10 years, focusing with people diagnosed with HIV and AIDS, terminal diseases like cancer, children with learning problems, addictions and emotional family therapy for families, couples and individuals.
In April 2019, Katia received the award of “Exceptional Women of Excellence” at the global Women Economic Forum, in New Delhi, India. Also at Tec de Monterrey she was conferred with the distinction of Assistant Professor in the category of Business Consultant. She has worked to build a culture of diversity and inclusion promoting conferences, lectures and forums related to positive leadership, diversity and inclusion and gender equality. She was the coordinator of Tec de Monterrey´s participation in the Women Economic Forum of Mexico City, October 2019.