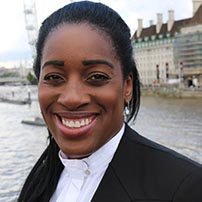 Kate Osamor is a graduate of the University of East London and Member of Parliament for Edmonton. After leaving UEL with a BA degree in Third World Studies Kate worked for the Big Issue, a magazine sold by homeless and long-term unemployed people. She later worked for 15 years in the National Health Service. In 2014 Kate was elected as a member of the National Executive Committee of the Labour Party and in 2015 as MP for Edmonton.
She was recently appointed into the Shadow Cabinet as Shadow Secretary of State for International Development..
Kate has been particularly active in campaigns such as Women for Refugee Women’s, Set Her Free campaign to end the detention of women who seek asylum in the UK. Alongside compulsory “academisation” of schools and to save Accident and Emergency services at London hospitals. She has strong views on student fees, the Trident nuclear weapons programme, and on welcoming refugees, proposing: “We must stand together in solidarity with refugees worldwide.”
Kate argues for much fuller representation of Black and Ethnic Minority communities in political bodies, especially in Parliament.