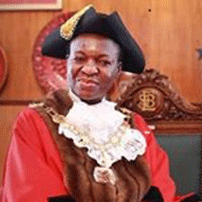 Kate, a mother of four, was widowed when her youngest was eighteen months.
She has over 30 years’ midwifery experience, and champions causes like health, children and young people, single parents and vulnerable groups in the community.
Kate has over 10 years’ experience in Local Government which included Mayor of Enfield in 2013. Won her fourth term in the last Local election and presently for the second time Deputy Mayor of Enfield.

Kate has a Law Degree and conferred with the Honorary Freedom of Borough of Enfield for her service in the community in 2007.
In 2008, conferred with Chieftain Title in her homeland Nanka- Nigeria, as :- ‘Ada Jelu Mba Tulu Ugo’, meaning ‘our daughter that went to foreign land and brought us glory’ Awarded Honorary Doctorate for Global Leadership in 2017
CEO/Founder:- ( FAWP ) Forum for African, African -Caribbean & Asian Women in Politics TenderCare Health Initiative