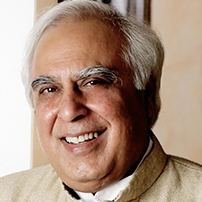 Former Minister of Law and Justice of India

Kapil Sibal is an Indian politician belonging to the Indian National Congress party. A lawyer, he formerly served at the helm of various ministries in the Congress lead UPA government over the years – beginning with the Ministry of Science & Technology, then the Ministry of Human Resource Development followed by the Ministry of Communications & IT, and the Ministry of Law & Justice.
Sibal was first nominated in July 1998, as a Member of the upper house of the Indian Parliament, the Rajya Sabha, from the state of Bihar. He served as Additional Solicitor General of India (December 1989 – December 1990) and President of the Supreme Court Bar Association on three occasions (1995–96, 1997–98 and 2001–2002).[2] In 2004 general elections, he won the Chandni Chowk constituency of New Delhi with 71% vote share. In 2014 general elections, he received 18% of the votes and trailed at third position for Chandni Chowk constituency, behind Harsh Vardhan (winner, BJP) and Ashutosh (AAP).