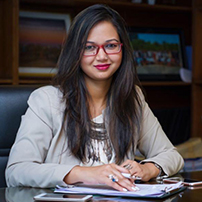 As an avid traveler, I have experienced the issue of information gap while traveling within the country. I have started “TripZip” in 2016 originally from this thought. Currently I am affiliated with Junior Chamber International ( JCI Bangladesh ). Apart from these, I am associated with Bangladesh Women Chamber of Commerce and Industries (BWCCI).
I have developed a sharp mind and became very perceptive in my ability to read people and situations. I have participated in various extra-curricular activities outside my educational institution which included public speaking, anchoring, and debating. In 2011, I participated in AIMUN in Peking University, China as the Head Delegate & then attended GMUN (Global Model United Nations) in South Korea as The Head delegate. I went to Canada for participating in WorldMUN 2012 which was organized by Harvard University, again as the Head Delegate. I also joined CBITMUN 2012 in Hyderabad, India as an Advisor. I was selected Ambassador for South Asia at WorldMUN 2013 in Australia which was organized by Harvard University and hosted by Monash University. Finally, I attended HamMUN 2013 as a Chair in Hamburg, Germany in Committee UNEP.
Apart from with these strong affiliations, I have organized different campaigns, Focus Group Discussions, Dialogue Sessions, Seminars, Workshops, Training sessions and more with Ministry of Foreign Affairs, Ministry of Civil Aviation & Tourism, Ministry of Environment & Forests, Bangladesh Tourism Board, Bangladesh Parjatan Corporation as an organizer.
Since childhood, I always wanted to pursue unconventional way in my professional life. My interest revolve around music, movies, reading, traveling, and photography. I have completed a Course of photography from Pathshala Academy simply out of interest. Also hold a Leadership Certificate in Managerial Communication from Institute of Business Administration (IBA), University of Dhaka (DU).