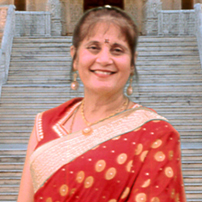 She runs a company called Golden Tours and a number of companies.
Golden tours – she is the finance director as well as a director and company secretary.
She also run a charity company named Golden Tours Foundation . this is mainly for the education on children and adults who are studying Hinduism in England and in India.
She is a patron in India in a girls school in Ahmedabad.
She is also involved in running the Diwali In Trafalgar Square in UK.
Other projects that she is involved in is
World War One and Two where – working with the UK Museums.
Hindu matters in Britain
Caste Issues
And lastly with the Swaminarayan Mandir in Neasden.

Her passion of YOGA is immense and she teaches Yoga to the needy – old and young and others in groups in centres.