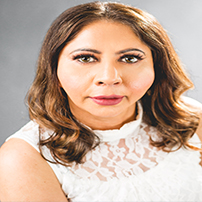 Kamal Dhillon is the author of Black and Blue Sari and a newly released book, I AM KAMAL, Survivor to Thriver! In her books she describes the harrowing details that unfolded – from the moment she married her husband at the age of 18 till his death 15 years later.

Kamal is a domestic violence survivor with a horrific story of inhuman suffering, which she bravely shares with the world. Through her courageous story, this inspirational speaker exposes her personal journey of living through a horrendous string of violence and torture throughout her 12-year marriage. Kamal’s stories are also about how she triumphantly broke free from her shackles. She now inspires and motivates others and challenges them to break free from unacceptable domestic situations.

Kamal’s stories will affect you, disturb you, enrage you and open your eyes to the reality and severity of domestic violence. Her talks are powerful. They are real. Kamal takes you on a journey inside her life filled with fear and many unknowns.
Kamal survived many attempts on her life. Her husband tried to kill her by hanging her with her sari, dousing her with kerosene, pushing her down a flight of stairs (when she was pregnant), drowning her, and attempting to electrocute her with an arc welder, and in other unmentionable ways.

Kamal has had 10 jaw surgeries as a result of the violence she suffered and now lives with an artificial jaw. What was meant to silence her has now become the source of her loud call to arms – a voice for change.

Kamal shares her story across Canada and the US, on what it’s like to be a victim and a survivor of domestic violence just to keep the family’s pride intact. These days, Kamal candidly shares her story and gives talks to the RCMP, Justice Institute for the new police recruits and providers of mental and medical health. She regularly goes into the First Nations communities to give talks to empower and give Hope to them.

Kamal delivered the keynote address at The World Bank and The International Monitory Funds (IMF) in Washington DC on the 2013 International Women’s day. Her talk at the BC Leadership Prayer Breakfast in 2014 to over a thousand attendees, including Federal and Provincial Leaders, was very well received.

Kamal has had numerous articles published on her story and has appeared on numerous Television and radio programs. She was interviewed on WUSA morning Television program in Washington DC, GS with GS live in New York, TBN 700 Club USA, and also profiled in a documentary called Petals in the Dust, which won two international awards in 2015.

Kamal’s story inspired the Canadian Immigration Minister to invite her to Ottawa to speak to the Citizenship and Immigration Parliamentary Committee on abuse. She also spoke at a conference in Ottawa organized by the Federal Justice Department on Honor-based violence and Honor-based killing. Through her tireless efforts to highlight the plight of domestic violence victims, Bill S-7 on zero tolerance for barbaric practices was passed in 2015.

Kamal is a sought after speaker. From her frank oratory, audiences discover the destructive grip domestic violence has on its victims and the strength required to break free from it. She is a positive example of how we do not have to be products of our circumstances.

Kamal is the mother of four children and a grandmother of four grandchildren. Kamal has been described as a powerhouse with the ability to encourage men, women and young adults to change their life trajectories in a meaningful way. Above all, Kamal is a role model to the countless women, continuing to struggle in the prison of their homes. She is the beacon of hope to them and continues to be a voice of the voiceless.