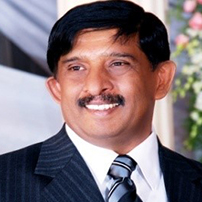 Shri.K C Ramamurthy, a distinguished Police Officer took voluntary retirement from IPS while he was working in the rank of Inspector General of Police. He has served in different capacities in the city and State and has the reputation of being the most effective, efficient and people friendly officer. He is one of the most popular police officer in the State and due to his public relations he has been able to solve many sensitive and important situations. He was always given very challenging assignments. He has served in Madhugiri, Chikkaballapur, Channapatna, Mysore, Hubli, Dharward, Bellary and later Bangalore city. All his postings required extraordinary zeal, enthusiasm, tact, hard work and excellent public relations. Whenever there was a communal tension, he was specially chosen to resolve them and bring in peace and was always successful in dealing with the situation and bringing peace and order. He is closely associated with many Dalit organisations and has significantly contributed to the growth of many organisations promoting Dalit issues.

A native of Bangalore city, he belongs to Vokkaliga (Reddy) community. He had his entire education from Bangalore and was a very popular student leader in the University. He was heading the student council of the University and served as its General Secretary and was actively involved in the student movement. His father was the Chairman of the then group of villages (presently called Sarvagna Nagar) for nearly 20 years. His wife Dr.Sabitha Ramamurthy is highly respected Educationist of Bangalore City. They have two children Sri. Jayadeep and Mrs. Tristha.

Sri.K.C.Ramamurthy, apart from serving in the Police Department, had the unique opportunity of working in various other Departments of the Government and was specially chosen by successive Governments to lead various sensitive and important departments.

He is the only Police Officer who has served the city of Bangalore in Law and Order, Traffic, Security, Armed reserve and Crime. He has to his credit many reforms in the department which has made public totally involve in Policing and this has not only got him the respect and recognition but also immense popularity. As Police Officer he touched the lives of people of all strata of the Society, as the Director of Culture and Languages he has wide and close contact with the entire cultural sector and as Registrar of the University, his association with eminent professors, teachers and large sections of the students community has made him one of the popular persons in the State of Karnataka.

He was the Commissioner for Culture wherein he got in close touch with the artists and writers of the State. He has organized many National level music festivals and is responsible for introducing schemes for artists from different age groups. He created Kishore Prathiba, Balaprathiba awards which are very popular even now and are introduced in many other States. He went to the grass root and organized the folk artists and other artists from village level. A pension scheme for the aged musicians, artists, sculptures was introduced during his tenure. The much talked about State awards were reduced in numbers and limited to the years of the States existence and the most qualified and deserving persons were selected. Even today it has remained a bench mark for selection of awardees. Many known intellectuals of the State are very close to him and interact with him on various issues. He has himself written many articles and is acclaimed as a contemporary writer and poet. The State Government deputed eminent writers and artists under his leadership to United States of America and United Kingdom to participate in the World Kannada Conference.

Due to his close interaction and association with the youth, he was chosen by the State Government to head the Department of Youth Services and Sports. He organized more than 30,000(Thirty Thousand) youth clubs in the State and gave a fillip to the improvement of sports in rural areas and was instrumental in convincing the 12th Finance Commission that sports infrastructure is as important as any other and was able to get Rs.100 crores sanctioned to the State for building up of stadiums in rural areas and for upgradation of the existing facilities. It goes to the credit of Sri.Ramamurthy that today in Karnataka there are stadiums (Sports Complex) in all the taluks. Nowhere in the country has this concept of rural sports complexes been introduced in this form. To bring in health consciousness amongst the rural youth he got gyms sanctioned to Taluk and Panchayath level. It was Mr.Ramamurthy who introduced the sports schools in all the districts of the State and made a graded system of identifying talent from different levels. It was again to the credit of Mr.Ramamurthy goes the introduction of awards for youth from the district level. His service in the Department of Youth Services was continued for three years and is very popular amongst the youth of the State. He has an army of young followers in different strata of the society. It was under his leadership that the Rajeev Gandhi Yuva Shakthi took shape in the State. This scheme was later taken up by the Government of India and spread to all the States.

Sri.K.C.Ramamurthy did a commendable job as the Registrar of Bangalore University. Under his stewardship, the University regained its strategic focus and even got credited with the five star status from the University Grants Commission and the NAAC. He was instrumental in creating a systematic working atmosphere within the University, scaling them to greater heights. He had maintained excellent academic atmosphere and during his tenure there were no strikes and other disturbances in the campus. Students, Teachers, Non-teaching staff, managements of the affiliated colleges were all having high respect for his efficiency and making the University system transparent and student friendly.

Sri.K.C.Ramamurthy is a people’s person. He is an integral part of the socio-political, economic and public spheres of Bangalore. He has been a close confidante of many known intellectuals of Karnataka and they interact with him on various issues. His ability to tackle sensitive and important situations has made him very popular in the entire city of Bangalore. He is born orator and converses fluently in English, Kannada, Telugu, Hindi, Tamil, Malayalam and Urdu. His negotiation skills, gift for words and popularity with different groups has given him an edge in successfully handling sensitive issues as Police Officer.

Sri.K.C.Ramamurthy’s education, vibrant personality, acute understanding, local familiarity, knowledge and important contacts will put him in the apt position of being a key player of social change in Karnataka and the Country.