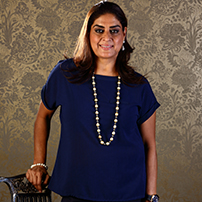 Even as a child Jyotika was idiosyncratic. She left high school at fifteen, skipped university and started her career at the World Bank at eighteen. After a decade at the World Bank, she started Janavi from her son’s bedroom.
An urge to give expression to innate creative sensibilities eventually lead her to build a community around her passions. She named it Janavi, and for over 20 years the brand has become a conduit for her devotion to design and excellence.
At the outset, Janavi conceived and created embroidered cashmere shawls and pieces for iconic European luxury homes. This honed Jyotika’s intuitive approach by allowing her to work alongside global design heads to their impossibly high standards.
Her aesthetics transcended trends in India while consistently striking chords with the global craft and design cognoscenti. It gave her the impetus to expand the brand internationally and to forge her own path, just like the river Ganges that inspired the Janavi name.