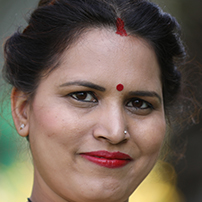 Jyoti Tiwari is a prominent proponent of gender research in the arena of well-being. She has vast experience of dealing with media as she has previously worked with All India Radio (Akashwani Lucknow) as news reader cum translator. She did her school from CBSE and her degree is from Punjab University,Chnadigarh . She did her journalism from Bharitya Vidya Bhawan.
She has worked towards sensitizing MPs and MLAs about the gender issues and problems. She is a blogger and a citizen journalist. She used to run a community center for men in Delhi NCR as she realized there is least training available to men. She counseled families through the community center. She has also appeared in various TV debates and programs voicing concerns on gender issues . She has also spoken to thousands of victimized people, listened to their problems and helped them stabilize in crisis situations. She has co-authored research reports to Government of India. She has appeared on international radio shows as well for creating awareness. She is a published author of the book the Anuurag which is a bestseller. Recently she has started training programs for people. These trainings are for relationship crisis and sexual harassment at workplace (POSH). SRL diagnostics awarded her as woman of substance in 2016.

SPECILAIZATION AND PROGRAMMES CONDUCTED –
She has conducted many legal seminars and trainings. She has conducted programs in New Delhi and Bangalore to create dialogue on gender issues. She has conducted online seminars for POSH. Recently, she conducted POSH awareness program for Shapoorji Pallonji Company.
Presently she counsels people in relationship crisis and she is a freelance trainer for POSH, Pre and post Marriage Counseling. She believes that men and women need education and training without being blamed. So, she is working extensively towards it.