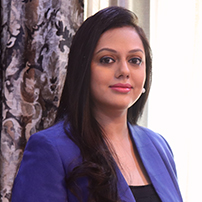 Juuhi Rajput started her entrepreneurial journey at the age of 25 and has been working in the field of media and power sector for past 14 years and 11 years, respectively, in various capacities including researcher, journalist, anchor, leader & entrepreneur. In the time span of 13 years of her profession, she has not only managed to create a space for herself in the power sector but also earned national and international recognition and secured leadership roles enabling her to make necessary and desired contribution to the energy sector and sustainability. In the year 2013, she was selected as the ‘Future Energy Leader’ by World Energy Council- A United Nation accredited global energy body based in London, UK. Within two years of her involvement, she was elevated to the position of Member of FEL Board- World Energy Council which is a steering group of ten top performing and engaged young energy leaders- making her the first Indian woman to achieve this honorary position (Jan’2015- Jan’2018). As a part of Board, she made a significant contribution in empowering and leading a group of 100 young global energy professionals selected from over 90 countries and helped in shaping, inspiring and growing energy leaders of tomorrow making them capable of solving the world’s most pressing challenges regarding energy and sustainability. She has also been contributing by being part of Energy Taskforces and various study groups of World Energy Council and giving energy related perspective of India and Asia region. Currently, she is leading a Delhi based media company- Arrucus Media Private Limited having expertise in conceptualizing and producing TV based news programs, organizing national and state level conferences, moderating panel discussions, exploring strategic partnerships, and designing & launching new initiatives. She has also been actively involved with the power sector for 10 years producing and presenting ‘Power News’- A national television news program dedicated to power sector. This has been the only television news program dedicated solely to power sector which helped in promoting energy efficiency and renewable energy; introducing ground breaking technologies, innovative and sustainable models; providing a platform to discuss issues and find solutions; recognizing the leaders, government and private organizations and their contribution to the power sector. She has conceptualized and organized various power sector related conferences as well as panel discussions with high profile national & international speakers. So far, she has anchored 400 episodes and more than 50 global, national and state level panel discussions. Several suggestions and recommendations made during these plenaries have been accepted by concerned departments and organizations. For example- The discussions organized on issues pertaining to the coal sector led to a formation of steering group by FICCI. This group created a white paper which was submitted to the Ministry of Coal and laid the foundation of much needed reform in the sector in 2014. Similarly, Ministry of New and Renewable Energy (MNRE) has taken several initiatives including a proposal to set up green funds to attract foreign capital and also explored an idea of developing the green bond market in India after the deliberations made during the panel discussion on Impact of Union Budget on solar industry. In 2016, Sebi’s board had approved detailed draft norms for issuance and listing of Green Bonds in the stock market to help meet the huge financing requirements worth USD 2.5 trillion for climate change actions in India by 2030. She also initiated a project- ‘State Power Conclaves’ with the theme ‘Balancing 5 As (Availability, Accessibility, Affordability, Accountability and Acceptability) imperative for sustainable growth of Power Sector’. It helped in providing a platform to various stakeholders to discuss issues and find solutions relating state Govt.’s mission of expanding power generation capacity, transmission & distribution network, ensuring electricity to all and improving energy efficiency as well as developing renewable energy. Conclave has been organised in Uttarakhand, Telangana, Rajasthan, Odisha, Andhra Pradesh and Chhattisgarh.