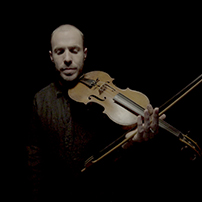 Justin Grounds is a violinist, composer and electronic music producer based in West Cork, Ireland. He studied baroque violin with Rachel Good in his home town of Cambridge, UK, and went on to do a degree in Music and Theology at Durham University, majoring in electroacoustic composition. Justin toured as violinist with the live electronic band Keiretsu as well as producing 5 albums of solo music. He most recently collaborated with songwriter Pearse McGloughlin on ‘Idiot Songsʼ, an acclaimed collection of ‘electronic chamber songsʼ taking
inspiration from Dostoyevsky. His work for orchestra and chamber ensembles has been celebrated for its “minimalist musical aesthetic, with an almost rhapsodic arch of movement.” His ‘Passacaglia Apisʼ for solo baroque violin and string orchestra won the inaugaral East Cork Early Music Festival composers competition in 2014 and was premiered by Maya Homburger and Barry Guy.
He performs regularly as a solo violinist, as a composing member of The Vespertine Quintet, the Barefoot Baroque project and with bands Idiot Songs, Fir Beag and Farewell J.R. He also works as a record producer and string arranger, teaches workshops with young people and is a member of the Arts for Health team bringing music to hospital and clinical environments.