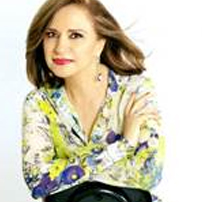 Julieta Lujambio Fuentes, is a journalist and radio and television host. She is also a logotherapist, life coach and electronic media, family mediator and mother.
For more than three decades she has worked continuously in social and news programs for companies such as Televisa, PCTV, Grupo Acir, and Once TV, among others. She has a degree in Public Accounting (ITAM). She studied Logotherapy (SMAEL) and several diplomas in various subjects related to human development and therapy. In 2006 she won the National Journalism Prize for the Journalists Club of Mexico and two medals of the National Association of Broadcasters. Its social cause is the promotion of better living conditions for single mothers and their children.