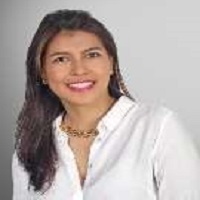 Director of the International Commission for Sustainable Development

Director of the International Commission for Sustainable Development -Agenda 2030- Global Women Leaders.
Director of Zero Hunger (Colombia & Venezuela 2020) Humanitarian Social Responsibility network.
International speaker, creator of @accionesODS -knowledge transfer and solutions for sustainable development in Latin America and the Caribbean.
Political woman, activist, social manager and agent of change in favor of citizen participation, the defense of the human rights of children, adolescents and Colombian families, from LATAM and the Caribbean.
Since 2005, it has had an impact on the creation of productive projects in communities that are victims of the conflict and/or violated conditions, with a focus on sustainable development. Promotes participation in different sectors of society in: public policies, human economy, care economy and global objectives. Mentor and ambassador of organizations that promote the well-being of women, participating in international forums related to: citizen participation, post-conflict, food security, gender equality, peace, politics, health and well-being.
Master in General Management of Companies with high skills to carry out negotiations and manage people, with a broad vision of the different areas of the organization.
Health professional and specialist with extensive experience in: consultancy and management of strategic planning processes, integrated management systems, Occupational Risks, Occupational Health and Safety, Comprehensive Health Care Policy, in its component of the Single Accreditation System .
His administrative experience in the field of: hydrocarbons, health, planning, education, risk management, environment, and quality in the public and private sectors has made it possible to structure and implement public investment projects with a sustainable approach for sectors of education, environment, culture, agriculture and health.
Certifications in NONFLICT and Gender Parity: Good Practices and Management Tools for the Transformation towards an Economy of Care, leadership, personal development.
He has co-created social impact projects for Latin America, such as Venezuela, Spain, Colombia. Zero Hunger. He is part of the ExpertODS Network in SDSN Mexico 2030, National Autonomous University of Mexico. I work with entities of the National Order, such as the National Police of Colombia where I lead the Operational Health program, convening a broad interdisciplinary team, to provide health and well-being to communities victims of the armed conflict, in 2003 as Head of the Area I managed to positively impact 129 municipalities, as a result of this, the National government of that time, reactive presence of the public force, in several of these places -Reactivation of police stations, Department of Santander-. She has been nominated in different international spaces for her activism in defense of sustainable life and human rights: 5ht annual WAW Honorary Award, #She is Leading” together with great personalities such as the First Lady of Jamaica Hon. Juliet Holness MP; the first lady of the Republic of Sierra Leone HE Fatima Maada Bio, the former Vice President of Zimbabwe Dr. Joice Mujuru and many more carried out in the United Kingdom, Sorority Network among them International “Breaking Barriers Award” summoned women leaders from America, Europe, Africa, Oceania and Asia to promote actions from participation in decision-making positions and influence the construction and transformation of society where rights and equal conditions prevail for women and populations whose rights and freedoms are violated or relegated , Peru 2021.
First Investiture “World Child Caregiver” for the rights of children, granted to great Latin American leaders who are committed to defending the rights of children with a culture of peace and in tune with the United Nations 2030 Agenda. Said investiture, which reflects all the Sustainable Development Goals and a call for a culture of peace, was headed by the President of the National Human Rights Commission CNDH of Mexico, Mtra. Rosario Piedra Ibarra, Accompanying this investiture, other great world leaders were appointed: Mr. Ausencio Palacio, Vice Minister of Indigenous Affairs of the Republic of Panama; the Master Mauricio Ibarra Ponce de León Consul General of Mexico in El Paso, Gustavo Adrián Espinoza Mármol Secretary of the Senate of Uruguay, Dr. Guipson Dhaity Dhaity Ambassador of Peace of Haiti; Mr. Ly Djerou Robert, Ambassador of the Ivory Coast in Mexico, Lic. Maria del Carmen González, National Director in Mexico of Global Africa Latina; the Mtra. Dora Isabel González President of El Faro Luz y Ciencia Global Firm, and member of the Mexican Chamber of Deputies, among other personalities, Honored for her empowering leadership, she has been invited as a speaker and participant at the annual Women’s Economic Forum in Delhi, India . Honoring her inspiring influence in empowering women, WEF 22nd Annual Award for “Iconic Women Creating a Better World for All”, India 2022
The Anadolu Agency, founded in 1920, based in Turkey, recognized “Zero Hunger” for its activism and social work during 2020, news that was disseminated in 12 languages: Turkish, English, Bosnian, Russian, French, Kurdish, Persian, Albanian, Arabic, Macedonian, Indonesian and Spanish. In the publication they highlight: The purpose of Zero Hunger Colombia is to deliver “nutritious and complete” food. But additionally, they have helped women, including foreign and local migrants, with businesses, daycare, supplies such as diapers, powdered milk and baby clothes, some medicines and vitamin C for minors, toys and even emotional support to promote “health mental and physical and social well-being of communities. “There is no border when it comes to advancing,” says Grisales, stressing that “hunger increases in times of crisis. Added to the current crisis, we face challenges such as poverty and climate change, which have undoubtedly motivated a more humane approach”.
Vanguardia Liberal, founded in 1919, published on June 12, 2020: ‘Zero Hunger’, the campaign that feeds the most vulnerable in Bucaramanga, highlights the initiative and invites the community to be part of building a better society.
He has been an undergraduate professor for public and private institutions in Colombia
Former candidate for Congress of the Republic in 2018 and pre-candidate for the House of Representatives of the Republic of Colombia in 2021
Honorary member of: the Society of Hispanic Entrepreneurs –SHE Global- Belgium, GRIT Stars by GRIT Academy, Community Tourism LATAM, ODS LATAM, Women in Leadership USA, Women 4 Solutions -W4S-