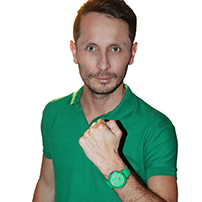 Young Colombian, member of the Youth Network of the Americas and of the international network of young social activists with the project “Cajica free of prejudices, territory of peace” whose differential and gender approach have enabled her model to be replicated in various spaces. Thanks to my capacity of communal and political leadership I have become president of a community action board in my native Cajica. I am a strong activist for the inclusion and rights of people from the LGBTI sectors, I have extensive experience in working with the population victim of the armed conflict and with young people in the empowerment and generation of capacities for the construction of peace. I am currently the executive director of the Fortaleza de Piedra foundation.
I have work experience in the unit for integral attention and reparation to the victims of the armed conflict in the population and situational characterization of the same, also as project director in the public relations agency Aliarse – PR. In the Fuente de Paz association, I was communications director and I carried out territorial accompaniment to the project “This is your challenge”, operated for USAID and IOM, whose objective was to raise awareness and pedagogy about the peace agreements reached in Havana. This was a project of national scope. I participated as project director at the She is Foundation in the strengthening of productive capacities that transform violence scenarios; highlighting awareness and positioning work in Torreón and Monterrey, Mexico. For the last few months, I have been working on the co creation of the Fortaleza de Piedra Foundation, which within the framework of a social responsibility model seeks to generate citizen capacity building with special attention to young people and women in vulnerable conditions. Passionate, funny, constant and with attitude for permanent learning, this is Juan David Sanchez