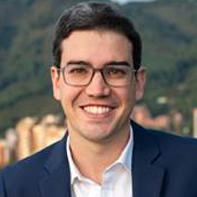 Juan David is a social entrepreneur, educator, and content producer. Juan David Aristizabal is the founder & President of Los Zúper, a non-profit organization equipping young people with the skills needed in the 21st century. Los Zúper combines media, filmmaking, tech and real-world events to build itd education network with thousands of students.
Juan each semester since 2017 gives a lecture on leadership at Cesa Business School in Bogota and he is the editor in Chief of Cumbre, a website platform dedicated to strengthen the link network soft skills education and employment. Forbes magazine listed him on its 30 Under 30 list as a leader in using media to connect Colombians to socially-minded initiatives and engaging the broader community in their development. Aristizabal is an Ashoka , Knight Fellow and Fulbrighter. He studied a MS in Journalism and International Affairs at Columbia University.
Juan David Aristizabal is founder of Todos por la Educación. It is the first Colombian social movement to gather people from most ideological and political beliefs around 7 top priorities that must be reached in education in order for Colombia to be competitive as well as peaceful (Pact for Education). In 2013, His team won an MTV Latin America Millennial Award for their Buena Nota Foundation, a digital platform founded in 2006 that showcases social entrepreneurship projects. He is co-founder of Buena Nota and currently serves as president of the Ideas for a Better Country Foundation. In 2012, Juan David was listed among the 100 Leaders of Colombian Society in the country ‘s magazine Gerente. In August 2013 both the Semana magazine and Leadership and Democracy Foundation ranked him among the 20 individuals who are revolutionizing Colombia.