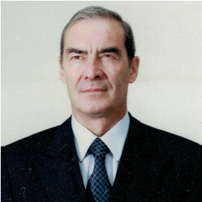 Major General retired, joined the Military Academy (Army Branch) and graduated in Electrical Engineering from Instituto Superior Técnico in Lisbon. During his long military career, General Cordeiro attended several courses in Portugal, United States and Spain, was in charge of several logistic military-related positions and participated in a host of abroad missions and joint operations. He also was a member of the NATO Interchangeability of Ammunition Working Group as well as Inspector of the Conventional Forces in Europe(CFE) Treaty.
From 1998 to 2000, General Cordeiro was Deputy Director of the Portuguese War College. From 2000 to 2010, he carried out duties as Member of the Board of several companies pertaining to the Defence Empordef Group. Concurrently he was named a national representative to and national contact point (NCP) for the NIAG –NATO Industrial Advisory Group.
From 2011 to 2013, General Cordeiro was Executive Chairman of the Board of a private technology company.
General Cordeiro is currently the Chairman of DANOTEC association – Portuguese Defence Industry Association, Member of the General Council of the CIP – Industrial Portuguese Confederation and President of the Board of the AED Portuguese Industry Cluster – Aeronautic, Space and Defence .