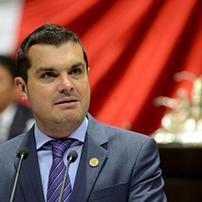 Mtro. in Public Policies, coordinator of the PAN bank in the Chamber of Deputies.

Jorge Triana Tena, a member of the National Action Party (PAN), studied law and a Master’s degree in Public Policy at the Autonomous Technological Institute of Mexico (ITAM). He graduated in Campaigns and Elections from the George Washington University, and in Public Management and Governance from the Complutense University of Madrid. He held the position of Director General of Social Development in the Miguel Hidalgo Delegation between 2000 and 2003, from there he developed the Faros del Saber program, the most modern and functional delegation library network in Mexico City. He inaugurated the first three lighthouses in the history of the Delegation: Constituents, Argentina and Legaria. He is currently a Federal Deputy to the LXIII Legislature for the 10th district of Mexico City in the Miguel Hidalgo City Hall. Chairman of the Committee on Regime, Regulations and Parliamentary Practices. Coordinator of the PAN deputies in Mexico City. Member of the Governance and Metropolitan Development Commissions; of the Special Commission to prevent the use of illicit resources in electoral campaigns and of Mexican friendship groups with Colombia, the Philippines and Israel.