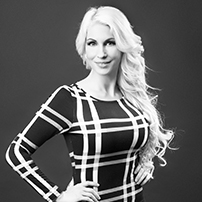 Dutch award-winning Entrepreneur Joëlle Dinnage, “inspirational businesswoman” and International Art Dealer. Started her first art business in 2010. After the successful and rapid growth of her first business. She founded the ‘Global Art Agency’ in 2011. Starting as an art event organiser based in Oxford (UK) the Global Art Agency has now expanded with offices in London and Dubai, and is one of the fastest growing international art platforms – with large art events in cities such as Tokyo, Abu Dhabi, Amsterdam, Barcelona, Miami, and Oxford.
The Global Art Agency succeeded with being shortlisted in the top 30 of the Virgin Media Business VOOM Awards with Dinnage’s pitch to Sir Richard Branson in 2015. The agency has organised over 30 large-scale international art fairs, welcoming over half a million visitors, generating art sales for their exhibitors of an estimate $ 10 million USD.
Joëlle is also the Founder and CEO of the Global Art Awards in Dubai known as “The Oscars for the Visual Arts”. She works together with His Royal Highness Sheikh Saeed Bin Tahnoun (ruler of Abu Dhabi) on impacting the Art & Culture positively in the United Arab Emirates.
Dinnage currently owns 4 companies, and has won over 10 titles for her entrepreneurship including the ‘Female Entrepreneur 2015’ – Stevie Awards in New York.
Joëlle is a philanthropist. Committed supporter of the orphanage of ‘Bwejuu’ in Tanzania. She has raised thousands of dollars for ‘Doctors without Borders’ through Art Auctions. She is a keen supporter of Cancer Research. Dinnage is a passionate Environmentalist. And a contributor to the Leonardo DiCaprio Foundation.