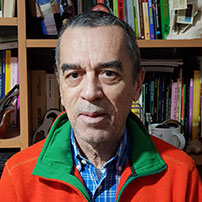 Joaquim Parra Marujo was born in 1951 in Lourenço Marques, Mozambique, and came to Portugal in 1975.
From his vast curriculum we mention his Phd in Social and Cultural Anthropology, his Masters in Mental Health Clinics and his extensive training in Nursing, Pedagogy, Transpersonal Psychology, Sociology, Economy, Culture and Politics.

He has presided the Scientific Commission of the Arts and Technologies University in Lisbon and has been a University Professor, Coordinator and Assistant at many Universities in Portugal and abroad.

He has supervised Masters degree thesis’s as well as Post-Graduate students’ Apprenticeships, and has worked and still works as a Scientific Investigator in the areas of Social Exclusion, Geronthology and Transpersonal Psychology, designating himself as a Soul Therapist.

He has so far published over 100 scientific articles in national and international journals and has received several awards for his outstanding career. He is regularly invited to preside Scientific Commissions for national and international Seminars, Conferences and Symposiums and belongs to 16 Scientific Associations.
His irreverence has left its mark throughout his life and he has never let his heart be tainted by the arrogance of many of the places he has worked at. He has always been firm in his honesty towards himself and others, keeping his heart and mind open and living his life with Passion and Zest, fighting for Human Beings’ balance and well-being as a holistic whole.

He has learnt that the most important thing for a Man, is to have a good consciousness and walk towards his own purification and self-revelation.

About Women he says: “Today. Yesterday. And, Tomorrow, will always be Women’s day. Life is always generated in a Woman’s Body. I owe my Life to a Woman/Mother. With her I learnt to respect all women. Many times she told me that a Man who does not respect and mistreats a Woman either was not loved or desired by his Mother, or would like to be a Woman and as he cannot, mistreats Women instead. To All Women, an Eternal Embrace”.