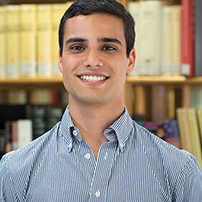 João Gaio e Silva, now a 20 year old student of Political Science and International Relations in the Faculty of Social and Human Sciences of the NOVA University of Lisbon (NOVA-FCSH) started by being a Scout at a very young age in the Group 172 – Abrantes. Later, he was the President of his High School’s Students Union and the Students’ Representative in other bodies, while also participating in some volunteering projects. In 2016, he got an Honorable Mention in the National Contest for the Philosophical Essay on Ethics and Practical Philosophy and his essay was afterwards published as a book by the City Council of Abrantes. More recently, in 2018, as part of the Ulisses Conferences, he was one of the winners of the youth contest for essays on the European Union. Last year, João was also recognised with the NOVA Young Talents Awards 2018.