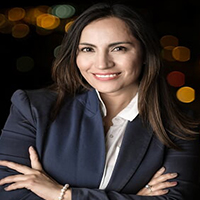 Joanna Prieto is today a personal brand recognized for its contribution to education (elearning), communication and digital culture in Colombia and Latin America. Regarding female and connective leadership within the entrepreneurial ecosystem, she has stood out for strengthening the soft and technical skills of women in technology. Work that has led her to have recognition in various media in the country such as Cromos Magazine, PyM Magazine, More Business Magazine, newspapers such as El Colombiano, El Heraldo, El Tiempo, among others. Awarded the WomenToWatch Colombia 2017 Award, Nominated within the 100 Women Transformative Leaders for her leadership and career in 2018, and winner of the Order of Merit Policarpa Salavarrieta by the Colombian Congress in 2019.
Joanna is an inter / national teacher, consultant and speaker: she has taught and lectures at different universities in the country such as the EAN University, the Gran Colombiano Polytechnic, Pontificia Universidad Javeriana, Universidad del Norte, Universidad de la Sabana, Universidad CES, among others by over 14 years She was named Insider of Colombia (representative) by Telefónica Spain for her Educared Meeting in 2011 in Madrid, Spain, as well as Female Entrepreneur Entrepreneur Eanist by EAN University the same year.
Consultant and consultant in Strategic Communication and elearning for more than 10 years for different companies in Colombia. Rosario University, DeltaIT, Pan American Games 2011, EAN University, Santa Fe Foundation among the most prominent.
Speaker in Spain, Argentina, India and throughout Colombia, with more than 250 hours. Speaker at the Women Economic Forum for Colombia in Delhi, India in 2019.
Co-founder of GeekGirls Latam, a leading organization in Latin America in the empowerment of women in technology. Entrepreneurship and position that has led her to have wide recognition in her environment.
Creator of www.joannaprieto.com, nominated for best elearning blog in 2013 and the 10 best Marketing and Digital Communication in Colombia in 2016. Nominated for Best Elearning Talent in Latin America by AEFOL Spain that same year