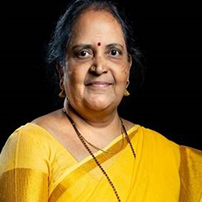 Jeyalakshmi is the Founder and proprietor of Universe Power Systems. Her educational background is in Electronics and Telecommunication Engineering. She is also a qualified teacher, trained dancer, choreographer and Carnatic singer. Her first entrepreneurial venture was the dance school ‘Nruthya Kendra’ that she started in 1984.

Driven by the passion to work in the area of Power, she started Universe Power Systems in 1997, as a business partner of Tata Liebert for UPS. From no prior customer base, Universe grew to serve more than 2000 reputed companies in various segments like IT, healthcare, Pharma, government, education and research. Under her efficient management, Universe has expanded its services to include “Total” power solutions, green power, Precision cooling (PAC), AHUs, Server racks, data centers and setting up Clean room labs and maintenance…

She was awarded the Rashtriya Rattan Award on the occasion of Indira Gandhi’s birthday in the year 2000 by the Global Economic Council for exceptional achievements in business.

In 2008, Kannada Prabha, a popular Kannada daily, bestowed her with the title of ‘Powerful Lady’. A book by the same title was released later that year.

2009- She was selected among 10000 women enterpreneurs across the world by Goldman Sachs, her management education at ISB was sponsored and Graduated by 2010.
2010- DQ week mentioned best example to manage home and office (When Lakshmi met Saraswathi) 2011- First generation women entrepreneur of 2011 award and got appointed as member of the
Advisory Board Council of Acharya Institute of Management, Bangalore. 2012- Received Mother Teresa Excellence award
2013- Featured in Workshop Magazine

B. Shrama Sadana Award by Abhinandana 2017

D. Became VP for FITDAK the Karnataka IT Association 2019- Emerging SME of Bangalore from ‘the Talk’ Power women of the year 2019 by ‘Indian Affairs’ Social entrepreneur award 2019
Received many appreciation letters from customers is making her proud.

Achieved this height mainly due to 24/7 service, Diversity (Adapting as per market trend), and mainly the support from customers.

Her long term goals are to manufacture power products that are affordable to all, and Make Franchises for Universe Power Systems serve India by encouraging women entrepreneurs & Youth and guide them in the right direction.
Started that initiative as Universe Business Solution, designed a workshop ‘Smart Scaling Up’ At Universe Business Solutions she has created many entrepreneurs; guided start-ups even
established businesses as Growth Consultant.

CSR- Universe Art Foundation- Estd by 2012, having 4000 artists’ database. Helping Indian Artists in all the challenges. Kaladharasya Suka jeevitham is the motto.

Be Powerful, Empower!!! When you think about Power!!!