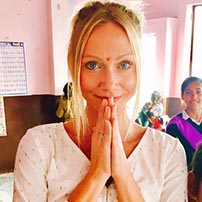 Jennifer Jarosik is a rising star in today’s world of multimedia. In addition to being apublished poet, a children’s books author, and a documentary producer, Jarosik is noted
as the host of the television show Star Spirit for Hulu in America, where she has candid interviews with noted celebrity guests regarding their outlook on life challenges, success and spirituality. Among recent guests on her show was legendary American talent manager, Hollywood film agent, and producer Shep Gordon, who was the main subject in the feature documentary Supermensch: The Legend of Shep Gordon directed by Mike Myers.
As an author, Jarosik’s writing is often inspirational and soul searching. Her first poetry book Amuse Yourself has been very well received, garnering glowing reviews from numerous readers. Following on its success, Jarosik’s second poetry book Conversations with Silence is presently being prepared of publication.
While her poetry is reflective, inspiring deeper thought, Jarosik’s series of 70 children’s books entitled Wisdom Teachings of Animals have fun and endearing animal characters, and are filled with humor, heart, and compassion, which teach life lessons to young readers. Her children’s books have received attention from publishers in America, the UK, Australia, and Germany. The first book in the series, Magical Dakota Little Two Dogs, was published in early 2016 and is available in retailers worldwide.
Ever busy with projects, Jarosik is also currently producing the documentary feature Unveiling the Rose. It is an ambitious undertaking on overcoming internal and external challenges, which led Jarosik to travel the world to interview international celebrities from Russell Simmons to Marianne Williamson and Nobel Prize nominees and winners.
At her core, Jen – as her friends fondly call her – is just a simple girl, who was raised on a farm in a small Nebraskan town. She attended Hastings College and the University of Nebraska, Lincoln. She enjoys the outdoors and lives an active lifestyle practicing yoga to maintain her overall fitness and health. She is passionate about helping others, especially women to find their voice and discover themselves. Perhaps Jarosik puts it best in her own words. “I’m just a girl from Nebraska. What I am learning most is that it’s not what you do, but how you do it. Do what you love. Accomplish your goals. Get to know oneself, and that voice, where you get a glimpse of God through silence, is truly a gift. Nothing outside can give you this much happiness or take it away. I love people and assisting humanity as I can.”