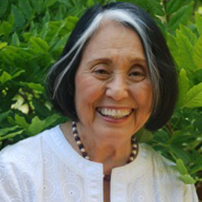 Jean Shinoda Bolen, M.D. is a psychiatrist, Jungian analyst, an internationally known speaker and author of thirteen influential books in over one hundred foreign editions: The Tao of Psychology, Goddesses in Everywoman, Gods in Everyman, Ring of Power, Crossing to Avalon, Close to the Bone, Goddesses in Older Women, Crones Don’t Whine, The Millionth Circle, Like A Tree, Urgent Message From Mother, Moving Toward the Millionth Circle, and Artemis: The Indomitable Spirit in Everywoman. She is a Distinguished Life Fellow of the American Psychiatric Association, a past Clinical Professor of Psychiatry, University of California San Francisco, and a former board member of the Ms. Foundation for Women, the Association for Transpersonal Psychology, and the C.G. Jung Institute of San Francisco. She is a leading advocate for WEF-5WCW Mission Million 2022. www.5WCW.org, www.jeanbolen.com.

The Millionth Circle Initiative www.millionthcircle.org was inspired by her book, its convener-members have been active at the United Nations and at the Parliament of the World’s Religions. She is an NGO representative to the UN of Women’s World Summit Foundation-Geneva (www.woman.ch), and also has represented Pathways To Peace https://pathwaystopeace.org. Jean was a recipient of the Institute for Health and Healing’s “Pioneers in Art, Science, and the Soul of Healing Award” and a Diplomate of the American Board of Psychiatry and Neurology. She was in three acclaimed documentaries, the Academy-Award winning anti-nuclear proliferation film Women – For America, For the World, the Canadian Film Board’s Goddess Remembered, and Femme: Women Healing the World..