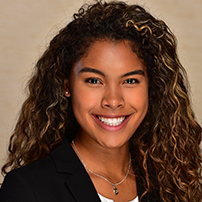 Jayda Howard is a junior at the University of California, Berkeley majoring in Political Economy with a concentration in Urban Development. She began her college career at Wake Forest University where she competed as a Division 1 athlete for two seasons on their women’s Indoor Volleyball team before transferring to Berkeley and playing a season of Beach Volleyball. Jayda has a 3.85 GPA and is a Management Leadership for Tomorrow Fellow. Additionally, she serves on the Board of the Black Student-Athlete Committee as the community liaison where she helps connect her peers to professional development and community outreach opportunities. Over the summer, she interned at Barnes & Thornburg LLP in Washington, D.C. and also on Capitol Hill for Senator Feinstein of California. As an intern for Senator Feinstein, Jayda worked on the healthcare and child welfare portfolio. At the end of her internship, she presented a policy proposal that recommended Senator Feinstein co-sponsor the Solitary Confinement Reform Act. After graduation, Jayda hopes to work as a business consultant before attending Harvard Law School. Ultimately she wants to start a non-profit or think tank in the political advocacy sphere. She is very passionate about criminal justice reform and food insecurity in urban communities. As a servant leader, Jayda hopes that her coursework at Berkeley and her time as a consultant will help her create feasible solutions to the social and economic problems that urban communities are faced with today. Jayda’s parents are Javin Hope, a former fitness model and realtor for elite athletes and entertainers and serves as a philanthropist on numerous boards. Her dad Stephen Howard is a former NBA player and a current college basketball analyst for ESPN and FOX Sports, an international speaker, author, and leadership expert.