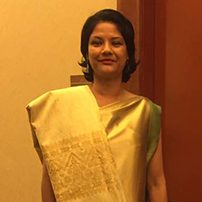 Janessaline M. Pyngrope, currently heads Daniel Syiem’s Ethnic Fashion House (DSEFH) as the Business Head, and is the Co-Founder & Partner of Daniel Syiem’s Ethnic Fashion House. Her experience includes project management, community work and vocational training all rolled into one. Armed with a degree in management education from BIMM, Pune, she decided to return to her roots to work towards change and development in the North East of India. She dedicated four years (2004-2008) to working for rural development at the grassroots level through the International Fund for Agricultural Development (IFAD) project in Ukhrul district, Manipur (UDCRMS-IFAD), as the Business Development Officer. Next, she worked in MRDS-LIFCOM as Assistant Manager BDS, Ri Bhoi district (2009-2010), Shillong for a year and a half where she has worked extensively to uplift traditional weavers and introduce new and safe weaving looms. From Jan 2011-May 2014, she was employed as Project Manager of Meghalaya for BASIX Academy for Building Lifelong Employability (B-ABLE). The focus here was to provide gainful employment to the youths of Meghalaya through short-term vocational courses such as Sales and Marketing, Basic Housekeeping, Food and Beverages Services etc…
Her myriad experiences working at local level with weavers and artisans encouraged her to also envision a business platform to promote the tradition and culture of the North East through fashion. Bringing her entrepreneurial abilities to the fore she teamed up with Daniel Syiem, to start Shillong’s First Fashion House- Daniel Syiem’s Ethnic Fashion House.
Janessaline Pyngrope was featured in Fox Traveller’s What’s With Indian Women, Shillong Chapter and has been mentioned in the book written by Mr. David Das, ‘Trailblazers, Meghalaya (2nd edition)’. She was awarded with the ‘Vasundhara’ Women Entrepreneur of the year 2014-2015 for the State of Meghalaya. She was also a panelist at the ‘Meet the Makers’ Singapore, for ETHICS track on the ‘Building a sustainable future for fashion’ panel at the TALKS for Green Is The New Black, held on 13th May 2017.
• Both Business partners also received the 100 Pipers True Legends Awards, in association with the Telegraph, 2016, held in Raddiosn Blu, Guwahati
• Daniel Syiem’s Ethnic Fashion House works was also telecasted in “Purvottar Ke Sitare”, DD National TV, on 16th September 2017
• Daniel Syiem’s Ethnic Fashion House has also been featured in the Book, “A People Called Shillong”, published by Penguin House, initiated and conceptualized by IIM-Shillong.