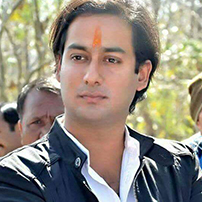 Member of The Legislative Assembly

Jaivardhan Singh graduated from Columbia University’s School of International and Public Affairs where he did a Masters in Public Administration in Development Practice. The course focused on sustainable development through an integrated model that covered areas such as Food Systems and Agriculture, Health and Sanitation, Infrastructure development, Climate Change and Energy issues that affect countries in the Developing world.

He had the honor of being taught by world renowned economists like Professor Joseph Stiglitz (Winner of Nobel Prize in Economics),ProfessorJagdish Bhagwati, ArvindPanagariya and Jefrey Sachs who is the Special Advisor to UN Secretary General, Ban Ki Moon. Jaivardhan also interned for 3 months in the Amazon region of Brazil where he worked with EMBRAPA, the Brazilian Government’s primary agriculture research organization.

Prior to Columbia, Jaivardhan worked for over 3 years with AT Kearney, a Management Consulting firm where he worked primarily in the Retail and IT sectors with clients in India and the US. He also interned for a year with the Planning Commission of India in the Rural Development Department where he worked on the Bundelkhand Drought Mitigation Package.

Jaivardhan did his schooling from The Doon School, Dehradun and graduated with a B. Com (Hons.) degree from Shri Ram College of Commerce (SRCC), Delhi University.

In the future Jaivardhan plans to work full time in his hometown of Raghogarh in Madhya Pradesh. He plans to use his experience so far and bring in research scholars and development practitioners from Columbia University and other world-renowned institutions to use global best practices in development back home in Madhya Pradesh. The idea is to try different models of development on a small scale and then scale up depending on which model is successful.

His plan is to work in Education, Health, Women and children welfare programs and in the Agriculture sector, especially so that farmers can benefit from moving up the value chain to gain better profit margins.

In the next 5 years technology will penetrate the smaller towns and villages in much bigger way. We need to build up our infrastructure so that we can maximize the full potential of Technological Innovation that is taking place across the global community.

He feels the future lies in grooming the youth by giving them access to better quality education, technology and Skill Development Programs. We have to create more job opportunities in smaller towns that can employ a large workforce. There is high potential in small and medium sized labor-intensive manufacturing industries which we must look at developing in the future.