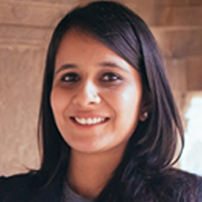 Ishita Anand is the Founder and CEO of BitGiving, India’s leading online crowdfunding platform which helps raise funds online for entrepreneurial ideas, creative projects as well as social enterprises and organisations. Named in the Forbes Under 30 List for Asia in 2017, Ishita is passionate about building products and is a self confessed geek who spent the first few years post college making animated and corporate films before diving into the technology world. She started her first venture at the early age of 22 and then went on to work with a technology company that build products for banks and businesses in India, Middle-east and South-East Asia. Her exposure to the financial world and her background with storytelling led her to conceptualize and build BitGiving when she decided to go back to entrepreneurship in 2013. Despite being bootstrapped till early 2016, in an industry which is still in its nascent stage in the country, Ishita’s infectious energy, perseverance and foresightedness has helped BitGiving grow from a two member company to a leader in the crowdfunding niche. An alumnus of Lady Shri Ram College, Delhi University, she studied English Literature, spent most of her time in the dramatics society and working for a University start up as the Head of Design. She has also been associated with Sheryl Sandberg’s Lean In Foundation as its regional leader for Women Entrepreneurs in India. She is a part of IVLP 2018.