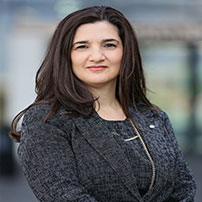 Isabella Bertani is a Partner in the audit and assurance group of Collins Barrow Toronto. Isabella has extensive experience working with private companies, foreign subsidiaries, charitable and not for profit organizations in numerous industry sectors including manufacturing, food and agriculture, retail and distribution, technology, and research and development.
Isabella’s current practice focus centers around foreign direct investment into Canada and domestic clients with global interests and her clients include numerous foreign subsidiaries of significant global entities.
Isabella is actively involved in advising foreign corporations with establishing their businesses in Canada. She has advised clients from throughout Europe, United Kingdom, Australia, Asia and North and South America on their Canadian operations.
A graduate of York University’s Schulich School of Business, Isabella holds both a Bachelor of Business Administration in accounting and Master of Business Administration with a focus in finance. Prior to joining the Collins Barrow team in January 2015, Isabella worked for a multinational accounting firm managing public and private companies, as well as managed her own successful public accounting and consulting practice.
Isabella sits on several boards and committees and is a passionate supporter of numerous charitable, professional and community organizations. Isabella is a strong advocate for supporting women in business and gender equality.
Along with being an Ambassador for CPA Canada’s Women’s Leadership Council which ischarged with promoting the advancement of women in the profession, she is also involved with numerous women’s groups outside of Canada promoting women in business .
Isabella was nominated RBC Canadian Women Entrepreneur Award in both 2015 and 2017.
In 2017, Isabella was bestowed the FCPA designation which is the highest distinction CPA Ontario confers on its members for bringing prestige to the profession through significant achievements in their careers and contributions to the community.