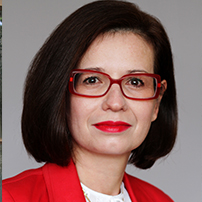 Iris is an author, public speaker, entrepreneur, and traveler who has published numerous articles and books on an eclectic mix of issues. The mix of topics reflects her firm belief in the power of combining different disciplines in order to arrive at a more balanced and nuanced view of the issue at hand.
Iris has spent many years in researching various subjects with particular reference to those that she believes will affect the roles of women in the fast-changing world of the future. She is convinced that women are the key to economic and social progress, not only in the developed world but especially in those developing regions where the transition to modern technical society is only just beginning. She believes that the skills needed to speed up the changes needed are very close to the skills that have been needed to be a successful entrepreneur throughout history.
It is to help promote women entrepreneurs that Iris has joined the Board of Womanitee, a Greek initiative to create a network of Centres for the Promotion of Female Entrepreneurs.
Amongst her other interests, apart from being the author of eight books, Iris is an active member of the Board of Academics and Director for International Relations of the Hellenic Association of Political Scientists (HAPSc) and, currently, President of the Interdisciplinary Committee. {HAPSc has Special Consultative Status with ECOSOC and is a Member of United Nations Academic Impact (UNAI)}.
She is also a Scientific Associate of the Laboratory of Health Economics and Management (LabHEM) of the University of Piraeus.
Prior to starting a family, Iris founded her own Consultancy in Public affairs, which concentrated on advising politicians, businesses, banks, and their leaders in relation to the changing nature of the world of communications and how to deal with the potential problems that were likely to arise.
She has published 8 books, including “Do We Really Know China?” a thought-provoking outsider’s perspective on one of the world’s major powers and the place of the ‘Sinosphere’ in the future of the world, “Trends in Healthcare – A Global Challenge,” “Human Health and OCEANS: Every second breath we take comes from our oceans,” and “ Wellness: A new word for Ancient Ideas.”