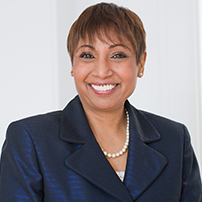 Iris Almeida-Cote, ICD.D/IAS.A., LL.M., M.A. is President and Chief Executive Officer at INNOVACONNECT Inc. offering strategic management services to organisations in Executive leadership, governance, public affairs, strategic communications, branding and audit processes. She also assists corporations setting up international business partnerships in Asia, Africa, Middle East and the Americas with training in inter-cultural preparedness and risk management. She has initiated major economic development initiatives and strategic partnerships in eighty countries. Strategic agility, flexibility and resilience are her hallmarks.
Iris is a Corporate Director (ICD.D) having completed the Director Education training at the Rotman School of Management, University of Toronto and the Institute of Corporate Directors in 2016. She is trained in Financial Management and Governance at the Universite Laval, Collège des Adminstrateurs de Societes (CAS) as well as in Health Sector Governance at the Institute for Governance of Private and Public Organizations (IGOPP). She also received her advanced management training at the McGill Executive Institute, Desautel Faculty of Management, McGill University and at the Canadian Centre for Management. Iris holds a Master’s Degree in International Law from the Universite du Quebec à Montreal (2001) as well as a Master’s Degree in Sociology from the University of Bombay (1982). She is proficient in English, French, Spanish, Hindi and Marathi.
In 2014, Iris received the Prix de la Reconnaissance (Outstanding Alumni Award) from l’Universite de Quebec à Montreal (UQAM), and in 2012 the SME Passport Award from the Caisse de Depot et de placement du Quebec and the Board of Trade of Metropolitan Montreal. Iris was Canada’s Top 100 Most Powerful Women laureate in 2008 and again in 2011, an award presented by the Women’s Executive Network. Iris received the YWCA Women of Distinction Award in 2009 and the Prix d’Excellence presented by the Reseau des femmes d’affaires du Quebec in 2007. She was selected in the first cohort of Diversity 50, an initiative of the Canadian Board Diversity Council, encouraging the inclusion of women from diverse cultures with specialised expertise in governance, to join corporate boards.
A senior executive leading transformations in organisations over the past thrity-five years, she served as Executive Director at the Royal Society of Canada where she worked with a network of Canada’s leading scientists, scholars and artists. She also served as Strategic Executive Director at the International Association for Public Participation and worked with trainers around the world to refine the content and methodologies for effective Stakeholder Engagement.e Iris were President and Chief Executive Officer at Canada World Youth, and President and Chief Executive Officer at the Canadian Pension & Benefits Institute. She was Director of Policy and Programs at the Canadian Parliamentary Centre – Rights and Democracy from 1991 to 2006, and Head of Programs at Partnership Africa Canada from 1988 to 1991. On an international level, she was Assistant Secretary-General of CIDSE an international organisation with consultative status and UN and the European Union in Brussels from 1986 to 1988, and President of the International Movement of University Students in Paris from 1982 to 1986.
Iris is Treasurer on the Board of Directors of Public Relations without Borders. She is a Strategic Adviser at the Institute d’etudes international de Montreal at the l’Universite de Quebec à Montreal (UQAM). She is also a member of the jury of the Innovation Awards in IT at the Canadian Internet Registration Authority. She served as Chair of the Audit committee on the Board of Directors of the Saint-Justine University Hospital (CHUSJ). She also served as the Treasurer on the Board of Directors of Lawyers without Borders Canada, the Board of Directors of the Canadian Society of Association Executives and as Strategic adviser at the Counsel intercultural City of Montreal.