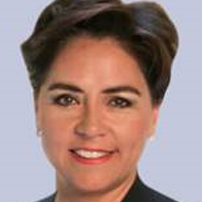 Deputy Governor of the Bank of Mexico

“Mexican economist and civil servant. From 2009 to 2018 she served as treasurer of the Federation during the administrations of President Felipe Calderón Hinojosa and President Enrique Peña Nieto. In January 2018, she was appointed as a member of the Governing Board of the Bank of Mexico, as deputy governor; becoming the first woman to hold this position within the central bank, she received the Award for Excellence from the Forbes Women Powerful Forum. “