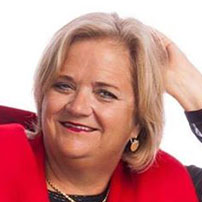 Ingun Bol, Founder of Female Wave of Change, strongly believes that we need the feminine energy and feminine values to make this world a better place. We want to connect women worldwide and support them to step into their femininity and make their voice heard.Ingun has been educated to be a city architect. Being that engineer she ended up in the ICT business at the beginning of her career and stayed for almost 20 years. Had a successful career as a sales and marketing manager.
Being a woman in this very male environment made her drift away from her real purpose.In 2003 Ingun started her own business Fit4Change were she supported many people worldwide to start their own business and live their passion. Working from a standardized concept she realized that many people did want to start their own business but really needed structure and guidance to make it happen.Having that very masculine mindset Ingun was surprised to be asked to organize an event for the 100th International Women’s Day in 2011. What happened in the next two months changed her mindset about women: on March 8th we had events for 1500 women on 12 different locations.Female Wave of Change After many years of smaller and bigger events to empower women, in January 2017 Female Wave of Change (FWoC) was launched. We live in a rapidly changing world and Ingun believes that we really need that feminine energy, those feminine values to change the world for the better. We need change to be disruptive now to come closer to who we really are, to our purpose. We need women to take responsibility to create their own future, the future of their families, their communities and the world.
FWoC offers women a platform to connect globally, to share knowledge and experience, to embrace change and create opportunities together. The past year we have build a large network of international Ambassadors and Wavemakers and are now present in 20 countries, e.g. Afghanistan, Pakistan, Lebanon, Jordan, Qatar, USA, Switzerland, Netherlands, UK, South Africa, Zimbabwe, Kenya, Australia, Brazil, Belgium, etc.
In this changing world, we need to join forces. Women can uplift each other and make sure our goals will be realized faster and in the best way possible. Building bridges between other international women organizations will open up a large network and expand the power of our voice.
Lets create huge waves together!
What if it is not you and me changing the world, then who?
What if not now? When?
www.femalewaveofchange.com
https://www.linkedin.com/in/ingunbol/